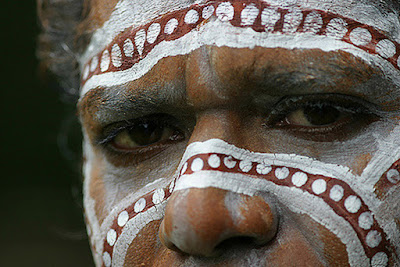 There is a belief that some primitive cultures feared that being photographed would steal their soul. I remember hearing this while studying photography in college. While it's possible to find references of certain cultures (Native American and Aborigine) being uncomfortable being photographed, actual references to a fear of "loosing their souls" in the process is much harder to find. In any event, it's an interesting concept and one I've thought about over the years. As, I've been going through my own "Artist in Denial" experience, I've put a different spin on it.

As I've said before, art is an intensely personal experience (see Admit it Do it Share it)  both in creating it and receiving it. If you are blessed to be a creator, making strong art requires being honest to your vision. You need to trust that vision and stay faithful to it. When you do that, a part of yourself is given to your creation. This is what others receive when they experience your creation whether that be a written piece, visual arts, music, or live performance. A part of you is given. As a recovering "Artist in Denial" who uses photography as his primary medium, I've pondered this in connection with soul-stealing belief of primitive cultures. There's a certain truth to this. But it's backwards. I don't steal the soul. Instead, I give a piece of my own. And the only way to get it back is to share it and have it received by another. It's the transaction of giving and receiving (Do it and Share it) that keeps the artist going. But it's a frightening proposition. You are exposing yourself in a most vulnerable way. Some people aren't going to care, some aren't going to like it at all. And that's painful. But there will be those who like it. Truly like it. Because it speaks to them. The transaction has been completed, your soul has been restored, and you can create more.

Being honest with your art is hard. It's much easier to listen to others and adapt your vision to theirs or to follow the trends and try to make something that people will like. While you might have some success doing that, there is a certain dishonesty inherent in that process (which is summed up in the phrase "whoring yourself") at some point you'll realize your mistake and find the joy has been removed. Creating art is a spiritual process. You've been given a gift. You need to share it. It's not only important to you, but to others who need to receive your vision.

"... (as an artist) you become the carrier of something that is given to you from what have been called the 'Muses' — or, in biblical language, 'God.'"

Register for Artist in Denial Course

Artist in Denial
My name is Zackary Hoon and I'm an Artist in Denial. Luckily, I know that I am not alone. I plan to use this forum to tell my story, present my ideas, and help others to realize their artistic visions.